Finally Justice’s baby babble has turned into recognizable speech.  At 6 months and 10 days Justice finally said ‘Dada!’.  He repeated it enough times for us to capture it on my iPhone.

We were excited to be there when he said his first words.   Hopefully his next words will be ‘Mama!’.

It’s too bad his night time naps haven’t turned into actual sleep, but that’s another story.  As it turns out the baby food that we have been giving him has been causing gas (carrots and sweet potato).  Last night I didn’t give him any solid food, just his formula.  This helped somewhat.

Yesterday they both had their 6 month check ups and shots including flu and H1N1.  The person who injected Justice poked him so freakin hard that blood shot out onto my pants!  WTH!

Tonight is not going to be fun.  Justice got another cold.  So his cold, plus the pain from the shots, and slight fever is going to result in another restless night.  God help us!  The only good thing about his condition is that he sleeps right away even though he gets up often (knock on wood).

Jasmine is probably getting Justice’s cold too.  There’s almost no way to buffer her from Justice’s germs.  They share toys and touch the same objects.  They put their hands in their mouths and poke each other in the eyes and noses LOL.

Not sure if either of them will say much today.  The cold wipes them out especially Jasmine.

Justice after his shot. 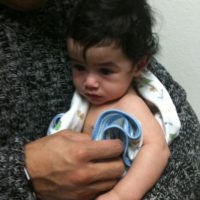 This site uses Akismet to reduce spam. Learn how your comment data is processed.

All dressed up and no where to go. @ Elk Grove, California https://www.instagram.com/p/CdmGNy_PS4ANtnhU6KyBoEwIjYXdkug4cIjZ-w0/?igshid=YTgzYjQ4ZTY=

If anyone has been considering the Oura Ring, I have a discount code. I have been using it since December and believe it has been useful in tracking and understanding my sleep metrics and exercise activities. If you're interested - https://ouraring.com/taf/83fcc7ef68

I tried to switch to Android OS but the apps and bugginess is still holding me back. Apps on different OS’ are not created equal.

Trying out a full length carpet instead of two ind