Rolando
Father of twins plus one! I'm back after taking a 5 year break from blogging.
Lessons

I know this is easier said than done, but you should always follow through on your commitments. If you say something, then you should do it. This involves careful thought because you want to be sure you can actually do what you say. It might be good to under promise and over deliver, but I believe you’ll be just as reputable if you just do what you say when you say you’re going to do it.

Growing up there was nothing more annoying to my mom than me saying ‘yeah yeah’ LOL. Rolando do this, Rolando do that. ‘Yeah yeah’.

Now that I’m in the corporate world, ‘yeah yeah’ certainly does not cut it. If I was President of the United States such as our President Obama, I’m sure he would not have been elected if he responded ‘yeah yeah’. When my boss says he’d like to see a headline report on his desk in the morning, I’m sure he means a lot more than just a summary of tasks and statistics. He means, show me a headlines report that talks to the initiatives that we are working on in the company and present it in a way that will wow me. This is probably what he means by having a headlines report in the morning.

Following through is easy, but it does take time, discipline, and commitment. It takes time, because you have to make sure you have a plan. It’s not just about committing to a task, but it’s also how you carry it out and how the instructions are given to you. 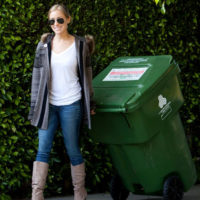 For example, taking the trash out means also replacing the trash liner and making sure you locked the garden gate.

It also means making sure you’ve gone through out the house and making sure all possible garbage is disposed of, not the the waste that’s in the kitchen trash can. It also means checking the recycle bin in the pantry and laundry room and making sure they are empty. This is what I mean by taking the trash out.

See, my mom never explained what she meant. She just said take out the trash and that’s what I did. I just took the trash from the kitchen garbage can and that’s it. I could have asked what did she mean? But then she’d probably say, use your common sense. You see there are garbage cans in the bedrooms and bathrooms, empty those too!

Lesson here is follow through AND ask questions. Ask what the expectations are of the tasks. This will set you up for success. Otherwise, you might feel the wrath of the evil slipper.

See the rest of our Nispiros Portal Lessons.

This site uses Akismet to reduce spam. Learn how your comment data is processed.

Keeping an eye on her while having lunch #xc90momentum @ RH Yountville Restaurant https://www.instagram.com/p/CYDViRjL60v6tptTsBGZOSsqrtcs2L-SVsg-cw0/?utm_medium=twitter

Thanks to my nephew for giving us his season holder seats for yesterday’s game. #goniners @ Levi's Stadium https://www.instagram.com/p/CW3t0BSvN8iACBSAq7RGveslbgUaMK-pBCRsrw0/?utm_medium=twitter

Trying out a full length carpet instead of two ind